The Bally’s Casino floor is very easy to navigate. I’m not saying it’s small, but it would be very hard to get lost here – even after 8+ cocktails.  To get to the Ballys sportsbook is a little tough as it is located downstairs by the food court.  You have to go down the escalators in the back of the casino (on the way to the pool & monorail) and walk through the mall.

On the first level, are the main casino, several bars, Jubilee Theatre and the walkway to the Paris Hotel.  The casino feature 67,000 square feet of gaming floor space  with the usual slot machines and tables. Please note that the lower level (called Ballys Avenue Shops on the map) has updated their food court area in 2013 and is not on this map from 2012.  Everything else on the map is pretty accurate.

Once known as the MGM Grand Hotel and Casino until it was renamed Bally’s in 1985 after being sold to the Bally’s Entertainment Group, this hotel was regarded as the first real “mega” hotel on the strip when it opened in 1973.  At the time of its opening, it was considered the largest hotel in the world with 2,084 rooms, and set a new tone of luxury in Las Vegas that would not be surpassed until The Mirage was built many years later.  Designed by Martin Stern, Jr. it cost a then staggering $106 million dollars.

Bally’s set the tone for a new era in Las Vegas history in the 1970’s.  While The Strip was populated with smaller, less modern hotels, Bally’s featured many amenities, including a wide selection of shows, shopping, and upscale restaurants.  It contained two theatres, The Celebrity Room, where The Carpenters and Barry Manilow often performed, and The Ziegfeld Stage.

Seven years after opening, the hotel suffered a devastating fire that started in one of the casino’s kitchens, which quickly spread, killing 85 guests and employees. This was one of the worst high-rise fires in history. As a result of this tragedy, improvements in hotel safety were executed throughout the world.

In less than a year, Bally’s was rebuilt and an additional tower opened in 1981.  The hotel has since been sold and resold, and today its current owner is Caesars Entertainment Corporation. The casino has been remodeled and the hotel currently features 2814 guest rooms in the North and Jubilee (formerly known as South) Towers.

The Jubilee (North) Tower elevators are located directly in front of hotel security in the far northeast portion of the casino.  The majority of the rooms are located here and were last renovated in 200. At this location, you have quicker access to the pools and the Monorail station. The Jubilee Tower rooms are accessible from the southwest corner of the casino. The rooms were renovated in September 2013, and many guests report that the views are better in this tower.

The pool can be accessed from the underground mall, which has a variety of restaurants, video arcade, several stores and kiosks.  This is also the way to monorail station that is located behind Ballys. Bally’s has two pools, one very large central pool in the middle, and the second, smaller pool that is geared more toward children.  There is a pool café as well as bar and plenty of lounge chairs for guests.

While at one time this was the best hotel in Las Vegas, today, it is showing its age, however for many guests, the prices of rooms and fantastic location are a reason to stay. 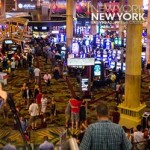